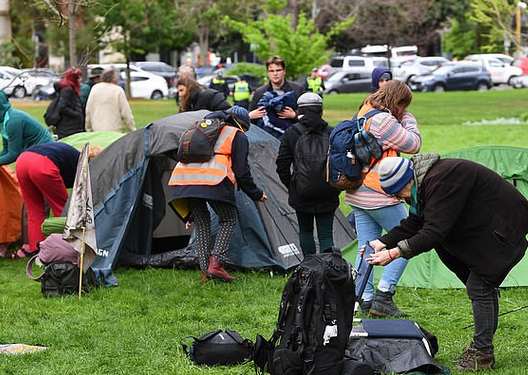 Like other towns and cities across Australia, poor Melbourne is seeing its daily life disrupted by green pests who think it their moral duty to sit down in intersections and block traffic. They are headquartered at the Carlton Gardens (above), on the northern edge of the CBD, where it is against the law to camp. But this is Victoria where what is illegal and what the police do about it are two very different things.

Not so long ago, for example, an agglomeration of layabouts, drug addicts, drunks, beggars, the deranged and, to the peril of pedestrians and their footwear, prodigious public defecators, was allowed to coalesce on Flinders Street near the entrance to the famous train station. In fits and starts the occupation went on for a year. In typical Melbourne fashion, when a citizen upbraided the rough-sleeping legion, Victoria Police moved him on and left the ferals in peace.  Thus, while one might think the Extinction Rebellion mob’s current encampment would be an immediate target for eviction — are there no fire hoses in Melbourne? — nothing has been done. Instead, the climate hysterics are indulged to violate the law, left untroubled as they make their daily plans and then allowed to sally forth intent on disrupting the lives of others.

To be fair to the police on the ground, their impotence is a sadder reflection on braid-encrusted senior commanders who, an observer can only conclude, must have ordered them to go easy on that enforcing-the-law business. Taking steps to restore traffic flow and allow commuters to get home has the potential to generate criticism from sources such as the ABC, which today has given over a page of its website to  former Radio National journalist Chloe Adams, to parade her righteousness. It is quite a piece of work, Ms Adams’ justification for making of herself a look-at-me public nuisance, replete with errors of fact and, underscoring it all, an arrogant ignorance that is jaw-dropping to behold.

The former World Vision publicist and Family Violence speechwriter (why is that pedigree not a surprise?) writes (emphasis added)

… the most terrifying part, everything we are experiencing now was written into our destiny several years ago, due to the lag between carbon being emitted into the atmosphere and its effect on the climate.

She has it entirely back the front. As noted by Tim Ball, who recently vanquished hockey-sticker Michael “Hide the Decline” Mann in a Canadian court, ice core records demonstrate that temperatures increase first — and then, and only then, do CO2 levels begin to rise.

The ABC is obliged by its charter to be fair, but it would be a fool who expects to see Ms Adams’ offering of faux facts before the altar of her own virtue balanced by an essay addressing the CO2 howler and other laughable misconceptions, amongst them that Tim Flannery is one of “the greatest minds in the climate and environmental space”.

When it comes to shirking gazetted responsibilities, Victoria Police has company.

The ABCs of funding