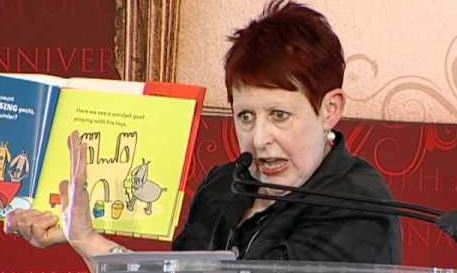 The Left blames Donald Trump for many things, so there is a definite irony in Mem Fox (above) accusing the US president of being responsible for her recent travails at Los Angeles airport.  Having excited the interest of an immigration official upon arriving from Australia, she complains of being “treated like a prisoner at Guantanamo Bay” when taken aside for a two-hour grilling. The US does something many Australians would like to do — deny entry to the ideologically sound, politically correct and forever cringe-worthy leftist baby-book author — and, just for once, Trumpism has nothing to do with it.

“This is what happens when extremists take power,” snivelled Ms Fox, who knows a thing or two about extremists, having been a vocal and frequent speaker in support of Taliban fanboy David Hicks.

Ms Fox’s ire is misplaced, as immigration officers at US airports might well be used to illustrate the dictionary definitions of “rude”, “arrogant” and “officious”.

It will spoil Ms Fox’s special sense of victimhood to learn that Ian “Molly” Meldrum encountered the same grief in 2004, when he told the immigration that he was in America to conduct a celebrity interview. That’s work, he was told, and bundled onto the next plane back to Australia.

One assumes Ms Fox announced she was en route to address a writers’ conference, which prompted her interrogator to reach the same conclusion.

And just to set her mind at rest that it is not only leftists who run foul of the US immigration functionaries, here’s what happened to a Quadrant Online editor: me.

It was 2008 and I was en route to cover the US presidential election for Melbourne’s Herald Sun when I informed a Los Angeles immigration officer that I wished to surrender my green card, having moved home to Australia and no longer needing it. The immigration officer was so taken aback that anyone would not wish to retain the right to work in the US that he dragged me off to a side room, where I was quizzed, fingerprinted, quizzed some more and, finally, photographed before being turned loose.

The entire ordeal took some six hours and cost me a connecting flight. Ms Fox demanded and has received an apology, but I didn’t expect one. Unlike your leftist icons, conservatives can accept that not all inconveniences are the consequences of vast right-wing conspiracies.

Ms Fox’s account of her “humiliation” can be read in full via the link below.

Policing at a Price