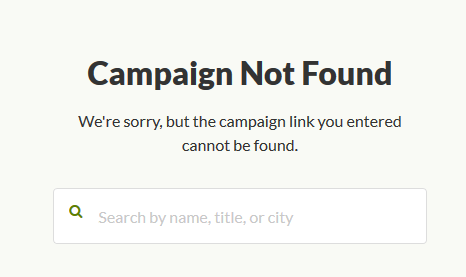 The entreaties of the Left have persuaded gofundme to suspend Israel Folau’s online campaign to raise money for his legal action against Rugby Australia.

Having raised $765,000 from 10,319 people in just four days, the only indication the fund once existed is the notification reproduced above.

There are causes and then there are other causes, it seems. No one took down ‘Egg Boy’s’ gofundme page when he became a hero of the Left for smashing an egg on Fraser Anning.

One law for the Left. Their law for everyone else.

UPDATE: The Left is doing what it does best: silencing by fair means or foul all who dare to disagree. As relayed by news.co.au, a statement from Nicola Britton, GoFundMe’s Australia regional manager.

As a company, we are absolutely committed to the fight for equality for LGBTIQ people and fostering an environment of inclusivity. While we welcome GoFundMes engaging in diverse civil debate, we do not tolerate the promotion of discrimination or exclusion.

In the days since Mr Folau’s campaign launched, more than one million dollars have been donated to hundreds of other campaigns, large and small, across Australia. Those acts of kindness are the heart of GoFundMe.

Our platform exists to help people help others. Australians have shown themselves to be among the most kind and generous people in the world. We look forward to helping more Australians fundraise for causes they care about in the coming months and years.”

According to the terms and conditions on the website, users may not attempt to raise money “for the legal defence of … intolerance of any kind relating to race, ethnicity, national origin, religious affiliation, sexual orientation, sex, gender or gender identity, or serious disabilities or diseases.

Folau will now receive none of the money donated by his supporters. Not a penny.

UPDATE II: Gofund me zaps Folau’s fund for his alleged “intolerance”. Appeals launched by those intolerant of Folau continue to accept donations.

Of cesspits and citizenship

Leave the lights on, Malcolm