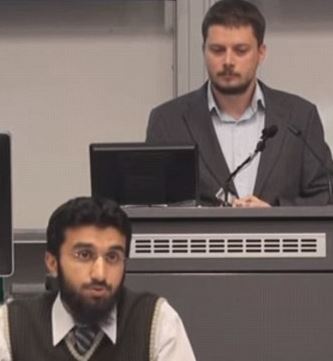 How very odd that the latest ALP candidate deemed unworthy of retaining preselection is a Muslim who goes by the name of “Christian”, but only in the company of non-believers and when presenting himself to voters. That would be Christian Kunde, who was bounced from contesting the NSW seat of Farrer when his association with the weird beard firebrands of Hizb ut-Tahrir came to light. Just by way of a reminder, it was Hizbee honcho Uthman Badar who prompted a you-can’t-be-serious outcry that saw him dropped from 2014’s Festival of Dangerous Ideas before he could lay out the case for murdering women who bring shame on their families. That’s the pair of them above, Badar to the fore, at a Hizbee gabfest in 2012.

Mr Kunde must be very unhappy that a political career has been scotched before it could begin, and so must the ABC, which did yeoman work to present him as the happy face of tolerance and multi-culti amity. A mere two weeks ago, Compass viewers were treated to an adoring profile of the now ex-candidate. It was, by ABC standards, a story that could not possibly go unreported, as it focused on his work as the coach of a women’s AFL team in Western Sydney. Talk about ticking every beluvvied box:

The Compass episode was multiculturalism’s Potemkin Village, all smiles and falafels-with-tomato-sauce and nary a mention of the unfortunate sorts who give tolerance (and our latest PM’s office elves) a bad name by endorsing the Koranic defenestration of homosexuals. Viewers learned how Mr Kunde met a Muslim bus driver who set him to thinking Islamic values were no different to his own, how he found his way to Allah and “to make things easier” decided to go by two names — “Christian” in the wider world and “Abdullah” when in the company of his co-religionists.

“It’s difficult for Muslims, I guess, to use that name,” he said, referring to the Christian christian name that would have appeared on Farrer ballot papers, explaining that he was Coach Abdullah to his team.

How very inconsistent is this multiculturalism? “Christian” is an OK name for ballot papers and ABC promotions, but intolerable to those who themselves demand the tolerance of others.

The Compass episode can be viewed in full via the link below.

UPDATE: Worth noting is the picture Mr Kunde chose to use in his election literature (above). No beard, nor mention of the elusive Abdullah either

Their kind of people