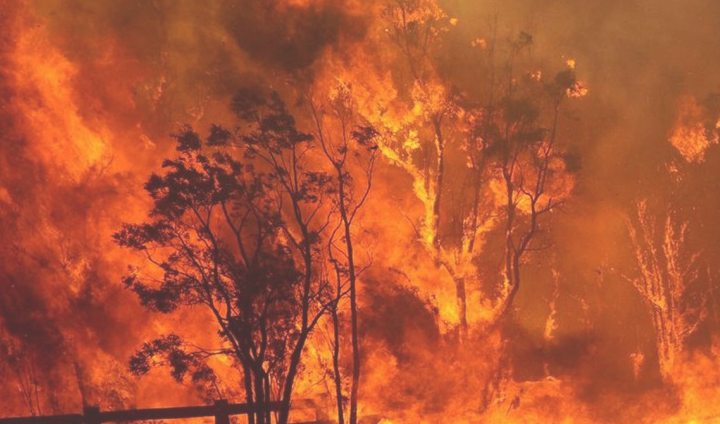 When Victoria was ravaged by the Black Saturday bushfires in 2009 a royal commission set out to determine what led to 173 deaths and billions of dollars in property damage. Today more fires are raging, this time in NSW, and at least three people are known to have lost their lives, but there will be no need for an inquiry because the cause has already been established to the satisfaction of the media, various lawmakers and those public officials whose job it is to manage Australia’s pyrophytic flora.

Yes, you guessed it: there is no blame to share because the lost lives and destroyed property are a direct consequence of climate change.  You can read all about this latest symptom of an overheated planet in just about any paper or news site, especially at the ABC.

Or, if that doesn’t satisfy, you can pick through the official and academic literature of land managers and agencies to gain a somewhat broader perspective — Ecologically Sustainable Fire Management for the Northern Rivers region of NSW being a good example. In it you will find this summary of the obstacles and difficulties encountered by anyone seeking to reduce fuel loads in overgrown, fire-prone bushland (emphasis added):

However, if the intended burn is not exempt nor does it demonstrate hazard reduction benefits, there is currently no clear burning approval process.

For this proposal a Hazard Reduction Certificate could not be issued. With no streamlined assessment available, it was important to ensure that all relevant legislation was considered prior to the burn occurring. This included:

•protection of Aboriginal and cultural heritage;

•controlling the spread of weeds; and

As there was a number of nationally and state listed species identified, a licence under Section 91 of the Threatened Species Conservation Act 1995 was required.

Issue of a licence requires considerable justification to show that an ecological burn will not ‘harm threatened species, populations, and ecological communities or damage their habitats’…

Bear the above in mind over the weeks to come, when all the talk will be of climate change and the purported efficacy of wind turbines, solar farms and sky-high electricity bills in stopping your house burning down.

Have modelling,
will travel