The ethics of relativism 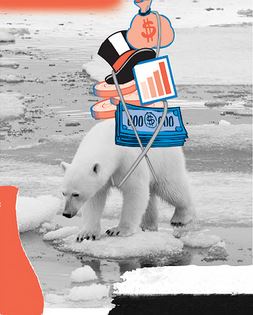 According to its publicity material, the Ethics Centre – formerly the St James Ethics Centre – began life when director Simon Longstaff arranged some chairs in Martin Place and “invited people to join a conversation. Everyone was welcome. Anyone could take a seat.” This was as it should be: a fairy ring of earnest, conspicuously concerned, self-selected chin-waggers polishing their self-esteem in the public gaze while those with genuinely productive things to do — walking to work, for instance — scuttled past untroubled by the anointeds’ gush of mellow burblings. Harmlessness itself, really, and perhaps even useful in that, while participants were busy holding forth unamplified, none was able to grace a Radio National microphone and impress themselves upon much larger audiences.

That was then, before that innocuous outdoor assembly was transformed by ambition, corporate donors and, of course, taxpayer dollars. Today, that circle of simple chairs has blossomed, much like Patterson’s Curse, into the large and very nicely funded organisation that runs the curiously named Festival of Dangerous Ideas, where inner-city orthodoxy sets the agenda:  Polar bears martyred by capitalism’s enviro-vandals (as per the FODI-supplied artwork atop this post); promos for hip-dudette home videos; Tariq Ali insisting from the tokenist pulpit of his sinecured otherness that ISIS hacking the heads off captives or burning them alive differs not all in the barbarism of its bigotry from drone strikes quite specifically targeting the instigators of such slaughters. Tellingly, as the clip shows, the FODI audience rewarded that thought with a round of applause even louder than the outburst of enthusiasm prompted by Ali’s denunciation of Israel’s creation (watch the video here). It’s that sort of entertainment for that sort of crowd – and if any doubt about FODI’s collective inclinations remains, note that the workshop on “investigative journalism” is run by The Guardian. Enough said.

Actually, upon reflection, it’s not. Also worth recalling is the stroke of Longstaff’s inspiration that once saw Hizb ut-Tahrir’s weird-beard-in-chief, Uthman Badar, invited to explain “Why Honour Killings Are Morally Justified”, an appearance Longstreet subsequently cancelled while simultaneously insisting the lecture was not actually going to examine why honour killings are morally justified. He is, in other words, the perfect candidate to wrap the appalling in the whole cloth of sophist distinction, which is what we find him doing in today’s pages of – where else? – the Fairfax press, which these days will publish just about anything so long as it is inane.

Longstaff’s latest topic is the Victorian Education Department’s endorsement of an outer-suburban school’s decision to usher Shia Muslim primary schoolers from the auditorium rather than subject them to the blasphemous indignity of singing the National Anthem. Apparently, if you follow Longstaff’s logic, an Islamic upbringing is somewhat akin to being afflicted with an ailment requiring corrective surgery. Well, he is in the dangerous ideas business – and dangerous it will be if some hothead takes offence at his likening of Islam to a debilitating sickness. He writes:

The fact that the spiritual world view is so unfamiliar to us does not make it any less real or powerful for those who are pious and fearful for the health of their souls. One might doubt the validity of the metaphysics but not the sincerity of the believers.

One could argue that, by such a standard, those “pious and fearful” thuggee devotees of Kali might be granted the indulgence of strangling strangers, as that particular murderous cult also is driven by “the sincerity” of its believers. But there is an easier refutation of Longstaff’s  argument, which accepts as a given that singing isn’t kosher during the Islamic month of Muharram. Two short words and a few second’s googling put the lie to that: Saman Pakbaz.

A week or so ago, Mr Pakbaz, an Iranian and a Shiite, took the gold in the discus event at the 2015 International Paralympic Committee (IPC) Athletics World Championships in Qatar. That’s him in the picture below with hand on heart as his nation’s anthem booms over the stadium, sacred month of Muharram ‘n’ all. 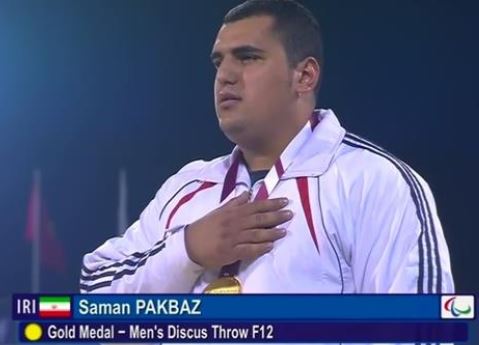 Why is it that Shia can honour without sin Iran’s anthem in their own part of the world, but would make common cause with Shaytan if singing Advance Australia Fair on infidel soil? Perhaps Longstaff could explore this doctrinal anomaly at his next FODI palaver-rama. Who knows, if Uthman Badar isn’t miffed at his creed being compared to a disease, he might be available to expand on the theme.

Longstaff’s thoughts can be read in full via the link below.