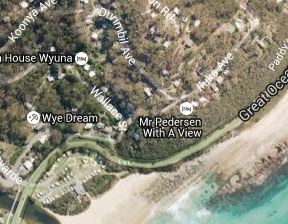 It is a dreadful thing to take pleasure in another’s suffering, but in the case of Age editor Andrew Holden difficult not to make an exception. Even further removed from supervisory duties than normal, he reports via the newspaper’s home page of having just inspected the ruins of his holiday house at Wye River. One of some 150-plus homes destroyed by Victoria’s latest bushfires, his get-away nest was a victim of the same green-infused cant to which his paper gives such uncritical prominence.

First, examine the photo atop this post. It is a Google Earth image of the tree-choked enclave in which Holden formerly sought refuge from the cares of plunging circulation and fleeing advertisers. Slashing and burning some of that undergrowth and top storey would have done much to make the fire easier to control by the simple expedient of reducing the amount of fuel available to be burned.  Worth noting is that, apart from a few hilltop patches, this blaze was not an all-consuming ‘crown fire’ — the sort that leaps and races from treetop to treetop at the speed of the wind and which claimed 173 lives during the Black Saturday inferno of 2009.  It was, for the most part, a ground fire. The proof of that can be seen in TV footage, which shows most trees with leaves still intact.

Once, as Roger Underwood and Geoff Walker report in today’s Quadrant Online, local fire brigades would have reduced the hazard with drip torches and volunteer effort. Today, vast bureaucracies and immense budgets have done nothing to reduce the fire risk. Indeed, for all the bureaucratic empires and nice new offices and study trips and million-dollar aerial tankers, the peril grows worse with every passing summer. And the peril is not only to human life and property. Conditioned by thousands of years of Aboriginal burning, the bush not merely needs to be burned, it yearns for the flames that renew and restore the diversity of its biota.

In days of old it was the job of the press to hold officialdom’s feet to the flames, so to speak. But as Mr Holden’s newspaper demonstrates, that is no longer the case. Now, alleged “environmental correspondents” parrot the green nostrums of alleged scientists and careerist grant-snafflers. Again, read Roger Underwood’s essay. And always, waiting to take dictation, are the likes of the Age‘s Peter Hannam.

Consider this story, for example, “Hazard-reduction burning has limited benefits in curbing bushfires: researchers.” Or another of Hannam’s dubious scoops, “Controlled burning not protecting us: report“. Or this nonsense from the Greens’ Ellen Sandell, a member of the Victorian Parliament, who reckons the best antidote to bushfires would be to close down coalmines and declare war on global warming.

Editors tend to shape their newspapers to please readers. Well here is an example drawn from Holden’s own recent pages of what he must imagine is the Age‘s target demographic. Frightening, no?

Dig through the Age archives and you will find plenty more of the same, especially in the letters column.

So, yes, it is sorry thing when a man loses the house he loved. But unlike the other victims of the Wye River blaze, there is some measure of poetic justice in this instance.

Andrew Holden’s account of picking through the wreckage of his former can be read in full via the link below.

No Walkley for you, Mr Leak