Deflating and de-funding the Left 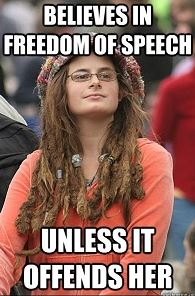 Daniel Greenfield, the blogger behind Sultan Knish, has some advice on countering the left:

“The left is not fighting this as a war of ideas. It attacks the area of least resistance with whatever slogan or argument is most convenient at the time. Don’t debate its ideas. Indict its hypocrisy. It mocks the values of others, but demands that what is sacred to it be off limits. This is a weakness.

Don’t defend your own values. Attack its values. You aren’t the establishment. You lost. You’re the rebels. Be rebellious. They are the owners. Wreck what they have made without counting the cost.

The left is not an organic entity. It is a pyramid of organizations and institutions. It needs the support of billion-dollar entertainment and media industries. Its community organizers need jobs with six-figure salaries. The left is destroying a civilization that it cannot survive without. It is an artificial entity that is weak and vulnerable in ways that the organic systems it has declared war on, such as the family, are not.

Destroy the system and the left dies. Destroy the flow of wealth and the control of ideas and it withers.”

As Joe Hockey works on his next budget, it would be nice to think that he will keep that last piece of advice in mind. He won’t, of course, and aren’t Mark Scott and his ABC minions happy about that!

Greenfield’s essay can, and should, be read in full via the link below.

The East is green. Really?