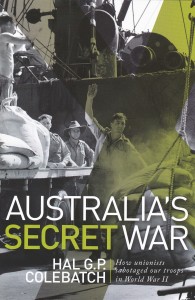 Historian and man of the left Peter Stanley has published a riposte to Hal Colebatch in the ongoing campaign to denigrate the Quadrant contributor’s prize-winning book, Australia’s Secret War, and demonstrate that strikes on the wharves and in the mines during World War II weren’t anything to fuss about and, when they were, must always be viewed in context.

Perhaps this means that when T. Dougherty, AWU General Secretary, was summing up 1945 in his annual report to members and accused fellow unions of deliberately sabotaging the war effort, he was not actually accusing of them of sabotage.  Stanley’s essay, which includes tantalising digressions into the circumstances of his parting company with the Australian War Museum and views on the essence of literary merit, can be found  here. Expect a return salvo from Colebatch in due course.

STANLEY: “[Colebatch] does not seem to confront the awkward fact that while the union was dominated by ‘Communists’, between 1941 and 1945 the Communist Party of Australia was ‘the leading war party’, whose officials strove to reduce industrial action and who supported more than most Australians the most vigorous prosecution of the war). While individual members of the union may well have lacked the ideological purity of their officials and may well have pilfered, struck and vandalised cargos, they were doing so in defiance of ‘the union’. Colebatch never grapples with this fundamental conundrum.”

COLEBATCH: This argument is simplistic and simply false. I devote a chapter to dealing with “this awkward conundrum” and come up with several possible explanations, while suggesting none is complete in itself (Why scare-quotes around “Communists”, incidentally?).

First, the strikes did occur, whether led by communists or members of the left-wing lumpenproletariat, between whom the difference was quite negligible. The official Commonwealth Year Book lists the number of working days lost – and in some industries these actually increased after Stalin changed sides in 1941.

Second, it does not take a very profound knowledge of World War II to know Stalin was not at war with Japan until the very end, and had nothing to lose by Australian Communists damaging the Pacific war effort. An important and scholarly US book, Stalin’s Secret Agents by M. Stanton Evans and Herbert Romerstein, reminds us that Stalinist Russia was not at war with Japan until the very last few days of the conflict (after Hiroshima). Japanese ships came and went out of Vladivostok through nearly all the war. Most importantly, as Evans and Romerstein point out, Stalin did not want a quick and overwhelming allied victory in the Pacific until he had moved troops from Europe and was positioned to take a share of the spoils.

To order your copy of Australia’s Secret War: How Unions Sabotaged Our Troops in World War II click the link below.

Schizophrenia at
the Parkville Asylum