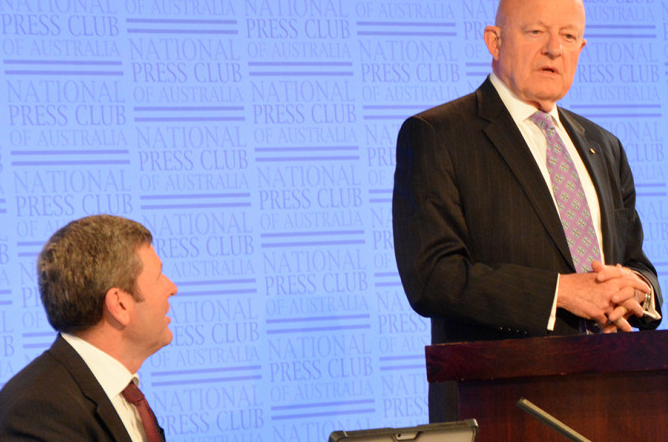 It was June  17, 2017, and the cream of Canberra journalism was clotted at the National Press Club to have preconceptions and prejudices about the Trump administration burnished by James Clapper (above), who was in town to pick up some quick pocket change for a FIFO gig at ANU. With the Russiagate hoax in full swing, the hacks  were keen to absorb the alleged insights of the man who served as Barack Obama’s national security adviser and, as he put it, spoke with the authority of an operative with “fifty-plus years in the intel business”.

Things were crook in Washington, Clapper told his audience, what with this Trump creature upsetting apple carts and doing the Russians’ bidding. That was when Mark Kenny of what was then the Fairfax press wondered what would become of America and Australian-US relations with such a rogue in the White House. Clapper replied:

…Watergate pales really, in my view, compared to what we’re confronting now.

I will add at least this American isn’t walking away, put it that way. I will just speak for myself.

Two years on, the Mueller probe having found nothing and with US federal investigators now looking into the origins and perpetrators of the Russiagate hoax which inspired it, Clapper is still speaking for himself, albeit in a somewhat shaken and lost-for-words manner.

Appearing on CNN mere minutes after the news broke that probers are poised to drag him and others into a criminal investigation, with the distinct possibility of grand jury appearances, perjury risks and charges being laid, the confident Clapper seen in Canberra was not in evidence.

For more on the net closing about Clapper and other Deep Staters, the links below are instructive.

Bombshells from the Flynn investigation