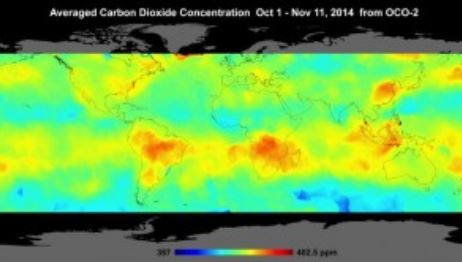 At his Blackjay blog, physicist John Reid finds both the unexpected and the entirely predictable in the first batch of numbers from NASA’s long-delayed and newly launched CO2-monitoring satellite. The surprise is that carbon dioxide concentrations are to be found, for the most part, nowhere near where those who blame modern life and industry for ruining the planet would expect to find them. The mundane is enshrined in the space agency’s press release, which evidences that standard warmist trait of overlooking the troublesome and obvious.

There is little evidence that CO2 from industry plays much part in the total scheme of things. Western Europe as a whole shows little evidence of excess CO2 production apart from the Eastern side of the Adriatic Sea where there is little industrial activity.  England appears to have been a net sink for CO2 in autumn.

An evening with Abbott and Ridd