The old Diggers (above) turned out, wore their medals, stood with hands on hearts as the long procession of hearses with their flag-draped caskets left Richmond RAAF base on the outskirts of Sydney. Home at last, their remains had been airlifted from Malaysia and Singapore, finally to rest in the soil of the country in whose service they gave their lives.

While the Governor-General was on the tarmac and Defence Minister too, Prime Minister Malcolm Turnbull was otherwise occupied.

He was looking at mattresses (below) in Lidcombe, all of 47 kilometres distant. 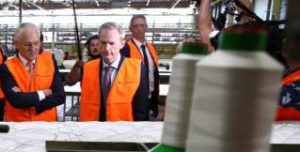 At the link below, the story of one of the Australians, Ron Lees, who finally made it home.