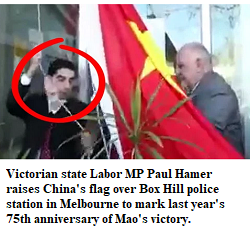 Conrad Black on China, its quislings and useful idiots, and what is to be done in response to Beijing’s bellicosity:

… Being as positive as reasonably possible, it seems that the Chinese were experimenting with a range of dangerous viruses, and that this one escaped unintentionally, and the highest levels of the Chinese government determined to deny what was happening, thereby assuring the infection of much of the world. If this was deliberate Chinese government policy from the start, it was an act of war; though it could not be responded to with outright hostilities.

It seems a reasonable surmise that the Chinese had succumbed to the frequent habit of those with aggressive ambitions of believing what they wished to believe. Moreover, they appear to have assumed the United States and the West generally would continue to tolerate immense trade deficits, the endless theft of intellectual property, systematic Chinese violations of international law in international waters, the creeping takeover of underdeveloped countries through a corrupt program of loans, and generally the “Belt and Road” program of expanding Chinese hegemony throughout East and South Asia and Africa…

Black’s essay can be read in full here.

By the beard of the profit!