Bluey and Curley, Gillian and Tim 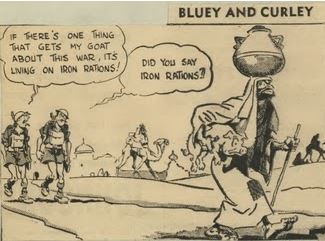 Readers of a certain age will recall the cartoon strip Bluey and Curley, which ran for decades in Melbourne’s Sun News-Pictorial and featured the adventures of the two Diggers after whom it was named. They represented an Army and later, when peace reigned, a nation the likes of David Morrison, our most ridiculous Australian of the Year so far, and his ideological soulmate, the appalling Gillian Triggs, have been very keen to admonish and erase. They were larrikins, disrespectful of authority, who enjoyed drinking, smoking and gambling — vices, in other words, that send  neo-wowsers and the hall prefects of political correctness into fits and conniptions.

The duo’s attitude toward multiculturalism also left something to be desired. The frame atop this post, the first of a two-panel strip published in October, 1941, makes half the point. The second, below, completes it. 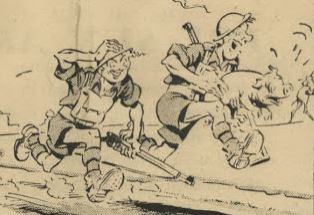 Lord only knows what sort of trouble artist Alex Gurney would be in had he submitted the strip today, but it is easy to imagine.

Grievance pimp Tim Soutphommasane would be off to Lakemba like a shot, accosting bearded strangers in the street and hinting that, really, they should avail themselves of the Human Rights Commission’s muscle and file formal objections. Why, there might even be some money in it! Gurney would be in deep trouble for alleged Islamophobia, not to mention humour of an unauthorised kind and, of course, cross-cultural insensitivity for the depiction not only of a Musselman with an oh-so-haram swine under his arm, but also for placing a water jug atop the Bedouin’s head and thereby assigning him a domestic role that is sole province of Arab women.

Gender fluidity is all very well and good these days, but not when it seeks to trump the sexism of those who have been imported to culturally enrich the miserable country that Bluey and Curley thought it well worth sailing off to defend.

“At the HRC we get results. I mean, you don’t have to put up with that nasty Bill Leak anymore, right?”

Click the link at the foot of this post for some amusing correspondence between Victoria’s wartime “publicity censor”, a certain Mr C. Burns, and a brass hat who demanded the strip be spiked because “there are no pigs in Egypt” and, if there were, the gent with the jug “being Mohammedan” would be prohibited from consuming it in any case.

Unlike what we can easily imagine to be the reaction of Soutphommasane and Triggs, who would see such a complaint as the perfect prompt to recruit a few more assistant offence-takers to their corner offices, Mr Burns went to bat for Gurney, his strip and the cartoonist’s right to risk “international repurcussions” by publishing it. And this, mind you, was during wartime.

What Bluey and Curley might have made of the Australia which Triggs and Soutphommasane have sought so hard to foist upon the rest of us will never be known, as the strip ceased publication in 1975 upon the retirement of Les Dixon, the third artist to draw it.

One can guess, however, that neither Digger would have tolerated such taxpayer-funded scolds for a split second. Sadly, their irreverent Australia has been very nearly as thoroughly erased as the strip’s former place on the Sun‘s (now the Herald Sun) comics page.

(A note: the strip and related correspondence comes courtesy of comics fancier and blogger Danny Best.)

$mack ’em, Steve, where it hurts