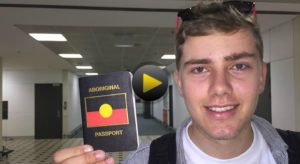 That’s him (above), Callum Clayton-Dixon, who bills himself as the head of something he calls the Aboriginal Provisional Government. If his administration is in the market for an attorney-general, Judge Mordechai Bromberg, who had some dealings with Andrew Bolt, might be interested in helping out.

A suitable case for treatment