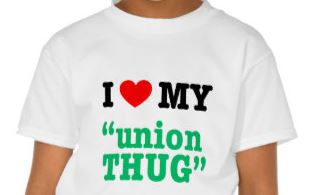 One of the best reasons to visit Professor Sinclair Davidson’s Catallaxy blog is the near-daily updates and analyses by commenter Johanna of testimony before the Trades Union Royal Commission. Her latest post, summarising Thursday’s evidence, helps to explain why Bill Shorten, the Labor leadership and all the bruvvers are so keen to make Commissioner Dyson Heydon the topic, not the carnival of misbehaviour chronicled daily in TURC transcripts.

The financial manipulations are very complex, but the bottom line is that there was an informal group of building unions which, among other things, had a Drug and Alcohol sub-committee. This mob was controlled by the CFMEU.

Separately, there was a Foundation, a registered charity, also controlled in effect by the CFMEU. It provided on-the-job training and a rehab centre, re D&A issues. For some reason, the CEO was a “recovering” (but as it turned out, not fully “recovered”) alcoholic and heroin addict.

Anyway, about 15-20 years ago, the CFMEU slipped a clause into their EBAs requiring a modest contribution – initially about 50c per worker a week – to the union sub-committee, on the understanding that the funds would go to the Foundation.

Over time, it became $1.00 a week, and then $2.00. Around the time it became $2.00 a week, half of the money vanished into the maw of the CFMEU’s general account, never to be seen again. Neither workers who were paying the levy, nor employers who were effectively subsidising it, had any idea about this.

There was lots of colour and movement in the testimony, which I encourage people who enjoy such things to read. Plenty of personal animosity among the bruvvas, accusations of CFMEU staff and officials spending their time in the pub and smoking dope, allegations of lying to the TURC by witnesses (from other witnesses) and so on … All good, fruity stuff.

Interesting, indeed, you might think, but perhaps not if your source of information is the mainstream media, which managed to ignore the testimony, as it has so many other revelations over the past year. Instead, predictable as the sun rising tomorrow, the media focus has been a faithful distillation of Labor-issued talking points.

“The Royal Commission is crippled,” writes the ever-reliable Laura Tingle in the Australian Financial Review.

In the SMH, the even more dependable Mark Kenny and sidekick Latika Burke seem to believe that decency demands Heydon be sacked without delay, as by their reckoning his polite request that the witness Shorten answer questions as put  was a “clash”. If either of this pair — journalism’s ploddingly predictable Darby and Joan in F**k Abbott T-shirts —  ever report that the world is ending, take it to mean that one or both has just broken a fingernail.

The paper’s editorial puts such incoherence on stilts. Yes, “Justice Heydon’s conduct in the commission has been beyond reproach,” it asserts before, in the next breath, demanding his resignation. Remember, the SMH is the paper whose editor swore in court that he did not believe “Treasurer For Sale” meant a treasurer could be bought. Once again, it seems, words have failed that sad, simple-minded wreck of a newspaper.

And on the ABC (need this be stated?), excerpts from Shorten’s morning homily to Radio National Fran Kelly in regard to Heydon’s alleged unfitness to preside have been running in endless rotation. The slim upside is that it means less airtime for more ABC-style coverage of the urgent need to legalise gay marriage, foil the CO2 poisoning of our tormented planet and liberate illegal aliens from the Belsen-like conditions on Nauru.

Yet somehow, an anonymous amateur posting unpaid on a non-profit blog manages to spot the real TURC story.

As to the Fourth Estate, is it any wonder its credibility, not to mention circulation, is vanishing without trace?

Those with an idle hour or two to spare can catch up with the TURC testimony via the link below. You might as well read it. The stenographers’ of the professional media just can’t be bothered making the effort.

The sort of planet
they always wanted