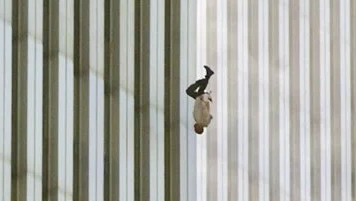 Yesterday in Australia, today in America, marked 18 years since Islamic butchers killed 2996 innocent people for a morning’s work. Since then, well … Bali, London 7/7, Paris, Manchester, Nice, Martin Place, Parramatta … the list goes on and on. Yet yesterday, when they read out the names of the Pentagon dead in Washington, one word was conspicuous for not being mentioned: Islam. Take as just one example,  the New York Times‘ coy assertion that it was “planes”, not their hijackers, which targetted the Twin Towers. 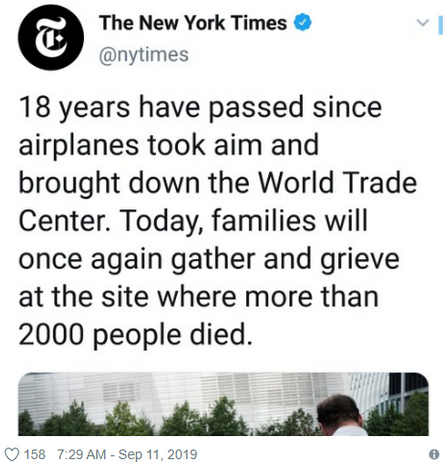 … To be fair, a lot of the ever increasing restraints on free expression are self-imposed: newspapers decide that it would be “insensitive” to publish certain cartoons, publishers politely decline novels on certain themes, and in Minnesota white progressives agonize that remembering 9/11 is “Islamophobic“. Which is weird – because a space alien visiting the United States for Monday’s ceremonies would have been stunned to discover that Islam had anything to do with 9/11. As I mentioned yesterday, the President forbore to mention Islam at all: Instead, we were attacked by “horrible, horrible enemies” and “enemies like we’ve never seen before”. Well, we’ve seen a lot of them since, and they appear to have certain things in common – things that this President was once not shy about mentioning. Yet, insofar as Islam got a look in from officialdom, it was a passing reference in the speech of Defense Secretary “Mad Dog” Mattis:

“Maniacs disguised in false religious garb thought by hurting us they could scare us that day.”

Well, whoever they are, these “maniacs” can evidently scare grizzled hard men called “Mad Dog” into concluding that, when it comes to mentioning the I-word, discretion is the better part of valor. “False religious garb” means we’re back to the standard Euro-squish line that all this Allahu Akbar I’m-ready-for-my-virgins stuff is a “perversion” of the real Islam, which is a peaceful faith practiced by millions of people for whom self-detonation is an unwelcome distraction from traditional activities such as clitoridectomies, honor killings and throwing sodomites off tall buildings.

Stop me if you’ve heard this before, but these “maniacs” are hijacking this “religious garb” in order to peddle a “false” vision of Islam. Foaming-canine-wise, Mad Dog sounds about as mad as, say, Theresa May. I take it that, even in today’s politically correct military, you can’t earn the epithet “Mad Dog” simply by handing out diversity awards to the Transgender Outreach Liaison Officer of the Month, and General Mattis served honorably and impressively in Afghanistan and Iraq. But, when it comes to strategic clarity, that may be the problem.

Steyn’s piece, ‘The Language of Losing’, can be read in full here.

And for those who need reminding of the day everything changed, but only for a while, Catallaxy Files has dug up a report written in the aftermath of the attack by the editor of this site and filed back then from Manhattan for the Sunday Age.

Somehow, the spectacle and memory of office workers leaping to their deaths from the burning World Trade Centre has been largely erased — and that is perhaps the last and most enduring of 9/11 crimes.

“Shut up!” they argue

Saint Adam of the Slant