Bad news all over 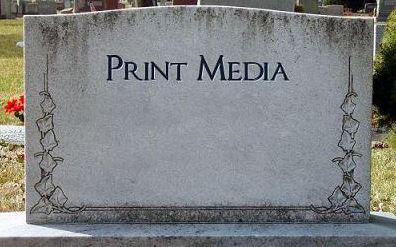 Australia’s publishers are heeding the wisdom of the legal profession, which has long held that, when the facts are on your side, pound the facts. When they’re not, pound the table. With today’s release of the latest newspaper circulation figures — numbers that speak of rot and ruin and the likely and imminent demise of several metropolitan mastheads — the  publishers’ spin merchants are pounding the growth in their digital editions. It would be a dim jury that could not see through that strategem, which neglects to mention that online revenues are but a small fraction, a very small fraction, of the cash that once flowed from ink-and-paper sales.

Still, there is a lesson there for those who still subscribe to that decidedly unfashionable notion that you reap what you sow. Take The Age, for example, which former readers know is run by unsupervised children, nakedly partisan, and thoroughly boring when not absolutely unreadable. And there are many of those former readers: In a city of some 4 million souls, The Age is now purchased by a scant 107,000 of them. The only upbeat way of looking at that figure is to draw consolation from the fact that the incidence of mental illness in Melbourne must be nowhere near so high as health professionals would have us believe.

One of the reasons for the Himalayan declines in Fairfax Media circulations is competition from the ABC, whose taxpayer support relieves it of the need to declare a profit. If electoral returns are any indication, the green-left audience represents no more than 17% of the market, so a government-funded behemoth is always going to eat its commercial rival’s lunch (organic and fair trade, of course) with that demographic.

Yet in “Editor-in-Chief” Mark Scott’s magic kingdom, where gross lapses of good taste are dismissed as “satire” and no one is ever held responsible for getting it wrong, there is woe and suffering of another kind:

The TV unit’s Christmas party has been put on hold!

It goes without saying that the Grinch is Tony Abbott:

“In light of recent statements by the Minister and the likelihood of an up-coming announcement, the TV Leadership Group feels that will regrettably have to post-pone next week’s Christmas festivities to Wednesday 3rd December. All running details of the evening will remain the same and Jd & the admin team will be in touch next week with respect to arranging new ticket sales and refunds.”

What will the entertainers who, rumour has it, were booked for the event do now? The man who was going to fornicate with a dog will be out of pocket and there will be nobody to crack jokes about those insignificant holidaymakers shot out of the sky by a Russian-made missile. ABC types just love that sort of thing.

BoM out in the cold