‘Anti-racists’ burn a flag or two 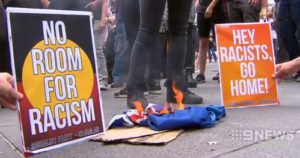 Across Australia yesterday, citizens turned out in numbers large and small to demonstrate their support for female emancipation, separation of church and state, and the equality of all races and religions before the law.

Predictably, they were jostled, spat upon, and denounced as ‘Islamophobic’ racists and Nazis.

And just for good measure, the ferals whom the ABC chose to endorse as ‘anti-racists’ burned an Australian flag or two (above). Fairfax’s Canberra Times (below) also is definite in identifying ‘racists’.

The Nine network has footage from various Reclaim Australia rallies on its website. Follow the link below to see which side initiates the fisticuffs.

The ‘right’ to be a pest