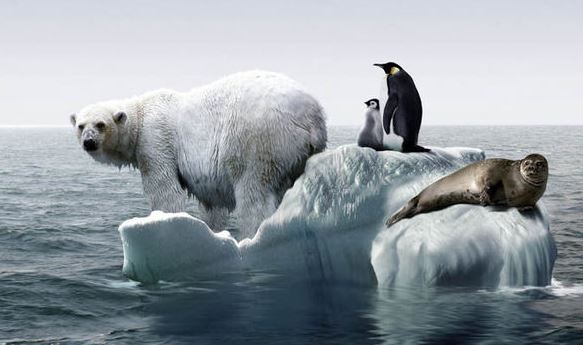 Yes, we know: there are no polar bears in Antarctica, but if climateers can make stuff up, so can we — albeit without the benefit of lots of lovely grants and taxpayer-funded expeditions.

You have to give it to the catastropharians: their oh-so-comfortably settled scientists are maintaining a perfectly imperfect record of dud predictions. The latest entry in the ledger of grant-funded error comes out of Antarctica, where the Ross Ice Shelf has been the subject of any number of dire predictions. If it collapses, we have been told, it will be global warming’s fault for sending an “upwelling” of warm waters that are melting the Spain-size expanse of ice from below. This doom-laden article at The Conversation is typical.

Not true, reports National Geographic in an article on the findings of a scientific survey which has drilled all the way through the ice to see what is going on beneath. The result was nothing like what catastropharians would have us believe:

The surprises began almost as soon as a camera was lowered into the first borehole, around December 1. The undersides of ice shelves are usually smooth due to gradual melting. But as the camera passed through the bottom of the hole, it showed the underside of the ice adorned with a glittering layer of flat ice crystals—like a jumble of snowflakes—evidence that in this particular place, sea water is actually freezing onto the base of the ice instead of melting it.

The full report can be read via this link or the one below.

Next, a BA in dishwashing?