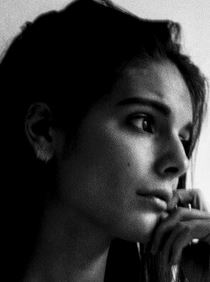 A snippy note recently arrived from a Fairfax reporter, the charge being that Essential Reading seldom criticises News Corp publications. Well, that is true but also easy to explain: levels of ambient idiocy in the Murdoch press are generally much lower than those of its fading rival. Today, though, thanks to news.com.au, that deficiency is more than somewhat addressed. The interview subject is the young actress and former Neighbours regular Caitlin Stasey, now aiming to make it big in the US.

Caitlin (need it be said?) is of the left, as her own web page makes very clear,  hence determined to make the world a better place, one small and transgressive step at a time:

Caitlin’s dedication to the cause is admirable, most notably because she has had to cope with the burden of a lifelong distraction:

“My vagina has been an unending and constant source of turmoil for me – not that vaginas are intrinsically female, it’s just happened to be a big part of womanhood for me personally….”

If Caitlin’s Hollywood ambitions founder, she can console herself with the near certainty that invitation to appear on Q&A is in the mail.

The number of the arts beast

First, do no harm?