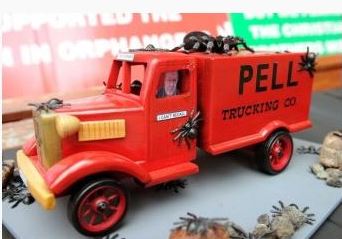 Cardinal George Pell has testified twice before the Royal Commission into Getting George Pell, but has delayed his third appearance due to medical issues. So how does the ABC give a full and comprehensive report of this latest development?

By making no mention whatsoever of those earlier turns in the witness box, leaving readers with the impression that he is pulling a Craig Thomson-style routine and hiding behind a medical certificate.

And just to make sure readers get the ABC-endorsed view of Pell as a crook in a cassock, the piece is illustrated with the picture re-produced above. That’s the Cardinal’s picture in the driver’s seat and they are spiders — as in rock spiders — he is happily delivering.

The national broadcaster is about to welcome a new managing director, a woman said by Quentin Dempster to be the personal favourite of our latest PM. She’s an expert on matters digital, apparently. Take this appointment to mean that bias, inaccuracy and omission will now be propagated with greater efficiency in many different and ever-expanding fora.

The ABC’s account of Pell’s non-appearance can be read via the link below.

The number of the arts beast