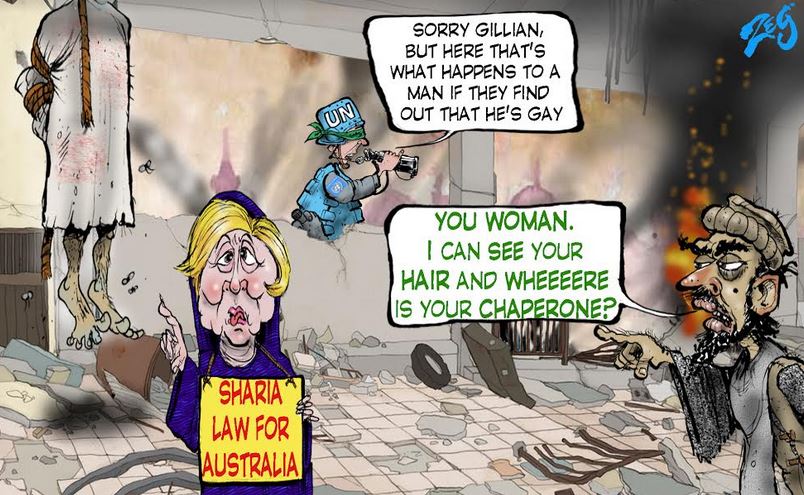 It’s really quite marvellous how the laws of attraction work and, more that, how what seems the guiding hand of Providence so often brings together those who most richly deserve each other. Take the other night at Sydney University, where an arrogant, ethically challenged parliamentarian of no known principles shared a stage and chummy chinwag with an arrogant, truth-muddled former head of the Australian Human Rights Commission. The occasion was the promotion of Sam Dastyari’s new book about his favourite topic, himself, with Ms Triggs the gentle inquisitor. It was a match made somewhere, although definitely not in Heaven.

Many might shrink from such an association. Dastyari’ infamously allowed a Chinese patron to pay his small-change laundry bills, then even more infamously betrayed his party’s platform and Australia’s bi-partisan foreign policy by supporting Beijing’s ambitions to make the South China Sea a private lake. We might not get anything more than putdowns of outer suburban homes and their owners from Slippery Sam, friend of the working man, but at least we know he works cheap.

And Ms Triggs? Well, apart from hounding poor Bill Leak into an early grave and lamenting that lesser mortals remain free to speak their minds about the kitchen table, she is also of the view that a man who beat his female partner to death with a bicycle deserves $300,000 by way of compensation for the inconvenience of prolonged incarceration. Common folk might not see the justice in that, but Ms Triggs is a creature of such acuity that to her learned eyes it is all very straightforward and fair. Question her judgment and she will explain, as she did to a Saturday Paper reporter, that members of parliament are dimmer than turnips.

Same with this incisive intellect’s appraisal of Catholic Canon Law, which she assured her Sydney Uni audience is just the same as sharia. Here is how the evening’s insight was reported:

...The former law professor likened the Islamic legal system to Catholic diktats from the Vatican.‘There are various ways in which religious law affects the private lives of people,’ she told Daily Mail Australia on Thursday night, after sharing a stage with Iranian-born Labor senator Sam Dastyari.

‘The views of the Vatican affect the lives of Catholics in this country.’

Professor Triggs also said Sharia divorce courts should be allowed in Australia, under a system where a Muslim man can leave his wife by saying ‘I divorce you’ three times and a woman’s word is worth less than a man’s.

‘If it’s a matter of private law within the Muslim community and they want to manage their affairs in that way, and they believe in those rules, that’s reasonably acceptable,’ she said.

Arthur Chrenkoff, who is no vegetable, makes short work of that notion.

The Curse of XY Chromosomes

Death, Where Is They Sting?