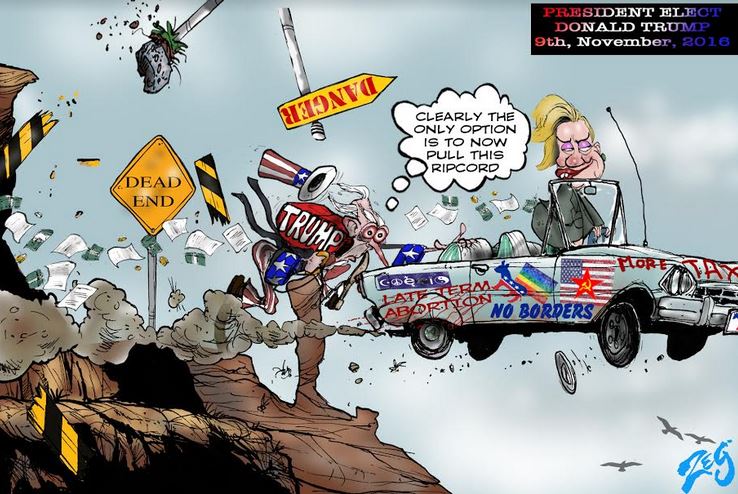 It isn’t nice to delight in another’s misery, but in the case of Hillary Clinton an exception can be made.

In the boot of that car, just by the way, you’ll find Fairfax correspondent Paul McGeough, who just two days ago assured his SMH and Age readers with the full measure of his magisterial authority:

On Wednesday, Americans will awake from a nightmare. Donald Trump will not be their president.

But relief will be short-lived. It will be more a “ha, ha, gotcha” moment appropriate to a lingering Halloween mood; because Trump is likely to be a sore loser, ready to inflict serial new nightmares on the US before he’s done with politics.

What’s all this based on? The losing part is a gut feel, supplemented by the late polling and high turnout numbers in early voting, especially on a Latino surge that is especially ominous for Trump.

And those nightmares to come? That’s based on what I suspect will be Trump’s inability to walk away from the crater of his campaign, without attempting to make it into something else – remember his claim that he always makes success from failure?

Americans woke up as usual. The Fairfax rags continue sleep-walking to their doom.