The Senate is conducting an inquiry into Australia’s transport energy resilience and sustainability.  The inquiry was initiated by formerly DLP Senator John Madigan of Victoria and is chaired by Senator Glenn Sterle of Western Australia.  These are practical men.  Senator Madigan was a self-employed blacksmith and boilermaker in rural Victoria from 1983 to 2011, close to 30 years.  Senator Sterle left school at 17 to work as a furniture removalist and, three years later, started his own business operating road trains throughout Western Australia and the Northern Territory.

Submissions closed last November and are available online.  I commend submission No. 33 in the first instance, written by your humble correspondent on behalf of the Australian Coal To Liquids Association.  Most of the other submissions mentioned that Australia is the only country delinquent with respect to its undertakings and obligations as a party to the International Energy Agency (IEA) agreement to hold stocks of 90 days equivalent of imported fuel needs.

Our holding is 50 days.  As we import close to 900,000 barrels per day, our shortfall is close to 40 million barrels.  All the other countries in the IEA hold the requisite stocks to comply with the agreement.  Australia is the only one of 28 countries that is delinquent.  This delinquency started under the Rudd/Gillard years but the current Liberal government has done nothing about it either.

At the time the submissions were written, the oil price was close to US$100 per barrel and rectifying the shortfall would cost of the order of $6 billion.  The ranks of the oil refiners in Australia have thinned in recent years.  The ones that remained all put in submissions saying that oil stockholdings don’t provide security and that what is important instead is the flow of oil, whatever that means.  They don’t want any changes to the fuel supply system at all because they might have to bear part of the burden for that on their balance sheets.

Back in the 1960s, there plenty of fresh memories of WW2 and rationing, particularly fuel rationing and shortages.  Oil was understood to be a strategic mineral and that Australia was at risk because just about all of our oil supply was imported.  So, at the time, the Federal government subsidised oil exploration – both seismic and drilling.  And when the first large oilfields were found in the country, in Bass Strait, they weren’t commercial to develop because they couldn’t compete with oil from the Middle East at US$4 per barrel.  So Australian motorists paid a premium for petrol to pass through a subsidy to Esso and BHP for their oil from Bass Strait.  As a result, we fared a lot better during the oil supply disruptions of the 1973 Yom Kippur War than we would have otherwise done. 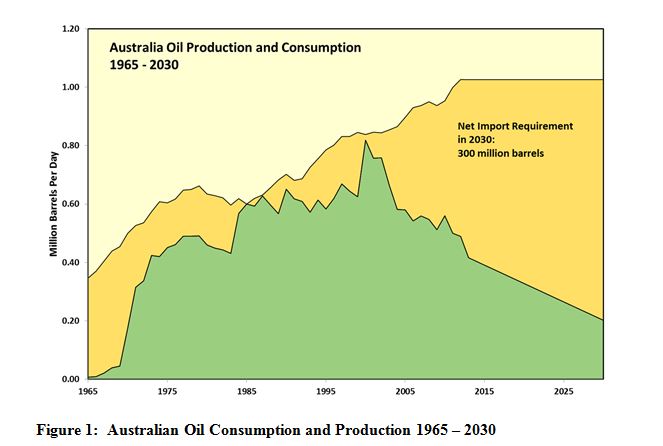 Those Bass Strait discoveries were the start of 40 years of abundance during which Australia was largely self-sufficient in oil.  That happy time ended in 2000 and our oil production has been falling away since.  Similarly, we used to refine all the oil we consumed ourselves.  Of the eight refineries that performed that task, the first closed in 2003 and it has been recently followed by three more to leave four – one in Queensland, none in the biggest market of New South Wales, two in Victoria and one in Western Australia.

The consequences of those refinery closures have started in that fuel supply is being disrupted.  Just a week ago there was a shortage of jet fuel at Tullamarine airport because a cargo of fuel had been delayed.  The refiners and marketers don’t want to tie up a lot of capital in their business and tend to live a hand-to-mouth existence with just-in-time scheduling.  Previously there had been shortages in rural Western Australia and Victoria due to bad batches of imported diesel.  As the National Farmers’ Federation submission to the inquiry noted, a diesel shortage at harvest could be disastrous.

This graphic shows what the evolution of Australia’s refining industry looks like: 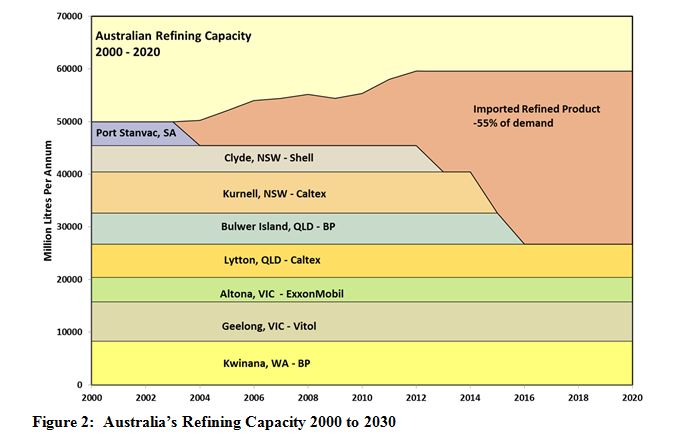 Even if we produced enough oil for ourselves, we couldn’t refine it.  And no amount of wishing or hoping or endless tears will bring our refining capacity back.

Most of the oil and refined products that keep the Australian economy going are now imported in big, fat tankers across thousands of kilometres of open ocean.  It is not just submarines we have to worry about.  These days there are air-launched anti-ship missiles that have ranges up to 1,500 km.  The tankers can be detected by satellites.  Ship wakes extend for hundreds of kilometres in the flat seas of the tropics and can be detected by satellite, then followed the source.  Oil supply is going to be very precarious in any conflict, so it would be prudent to assume we aren’t going to get any.  Since that would leave us with next to nothing, we have a problem.

While no part of the Australian defence forces or any associated think tank made a submission to the inquiry, Rear Admiral Clint Thomas, Commander Joint Logistics, will be making a presentation to the Inquiry’s only public hearing this coming Monday, February 2, at 66 Goulburn Street, Sydney.  The Rear Admiral is on at 4.00 pm.

There is a solution to Australia’s liquid fuel security problem and it is a very good one.  The solution is to use coal-to-liquids (CTL) technology to convert the low-grade portion of our substantial coal reserves into liquid fuels to keep farms, factories and food distribution systems operating.  CTL technologies were developed in Germany in the 1920s and then adopted by South Africa in the 1950s in response to sanctions related to apartheid.  There has been a recent burst of activity in China, with 20 coal conversion projects approved by 2013.  CTL production will rise to 1.1 million barrels per day by 2020, requiring 180 million tonnes of coal per annum.  This is just about what Australia needs.  China also has 20 coal-to-methane projects in train which will require a further 200 million tonnes of coal per annum.  In total that amount is about what Australia mines each year.  A recent list of Chinese CTL projects has been compiled by Oxford Energy: 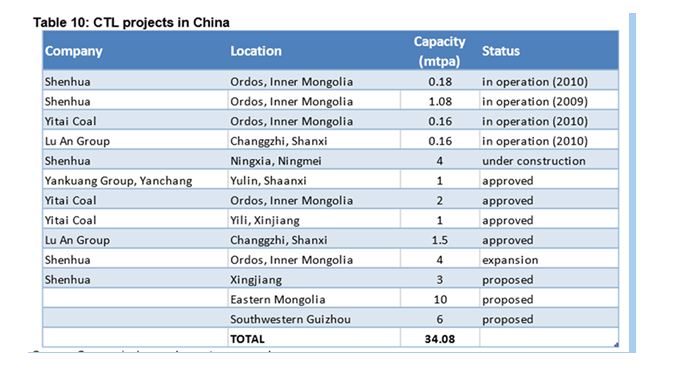 This list totals 783,000 barrels per day.  It is not complete because at least one project missing is the 25,000 barrel per day Jincheng coal-to-petrol facility.  There may be more.  The point from all this Chinese activity is that Australia need not be tentative relying upon CTL to solve our liquid fuel security problem.  The technology has been proven and re-proven.

The other thing that China is doing to improve its liquid fuel security is stockpiling oil.  At one point in 2014, it was estimated that China was putting 1.4 million barrels per day into storage.  Now that the oil price has halved, they have gone hard again and a large proportion of the world’s VLCC fleet is now tied up in carting oil to China.

Tankage is easy to build.  The capacity of a tank goes up with the square of the radius while the cost of the steelwork is proportional to the circumference.

Let’s have what China is having – both a proper strategic oil reserve and the CTL industry that makes us immune from the world’s troubles.  And don’t say we can’t afford any of it.  In the last few years, Australia has spent or committed to spend more than $100 billion on ephemera, namely:

That list is not exhaustive.  The point is that if we can afford any of that fluffy stuff, we can afford something that is a much higher priority to the nation’s wellbeing.  The Paid Parental Leave scheme was a Tony Abbott “captain’s pick”.  I have a suggestion for Mr Abbott:  Take some of those same funds, buy 40 million barrels of oil and build the storage for it.  In fact just keep going and spend the lot on oil and tankage.  It will look astute now that the oil price has halved and we will all be able to sleep more soundly at night.

Bishops for boat people. Pity about the Copts